Last night I wanted to end the night with a kief bowl and instead ended up dropping all of it on the ground. After mourning my loss and spending five minutes trying to pack a bowl that was comprised mostly of dog hair and dust I gave up. I decided that in honour of the lost kief I would spread the good word. The Gospel of Kief if you will.

It’s such an underappreciated concentrate, despite the fact it’s incredibly potent, delicious and by far the easiest to collect. In fact most modern grinders have a chamber specifically for catching kief. Many people know that it’s good to collect but many are unsure of what to do with it.

Let’s look at some of the ways you can collect and appreciate kief.

First off though let’s talk about what kief even is. No, it’s not the name Keith in a bad English accent. Kief is a collection of trichome heads that have fallen off the plant. As mentioned before it is very potent due to the remarkably high percentage of THC. Kief also contains natural terpenes that really highlight the flavours of its respective strain.

The coin should be small enough that it will be able to move freely but heavy enough that it will knock the resin glands off the plant. A quarter works great! I recommend making sure its a clean quarter as you don’t really want to be smoking weed that’s been rubbing against a dirty 50-year-old quarter. I don’t know. Maybe that’s just me being neurotic.

Even without the coin, just shaking your grinder after your ground flower all in the second chamber will naturally knock off trichome heads. The quarter helps knock off considerably more kief and helps it press through the screen. I was initially concerned that I’d be making the flower less potent in some way. However, the difference is not noticeable at all. The only thing that is noticeable is that the amount of kief in your chamber will almost double.

Having a grinder with a kief catcher used to be a rare feature but it is common in most sold nowadays. Even Canadian Tire has joined the game! They call theirs as a “herb grinder” which, to be fair, is accurate. Though they have a picture of rosemary beside it and I’m not sure how well it would do at grinding that. Regardless, even their grinder comes with a kief catcher! As they explain, the “mesh screen filters fine particles from the dry ground herbs”. You know, for collecting that rosemary dust!

Grinders are great at collecting kief in small amounts. That said, sometimes you don’t want to have to grind for hours just to collect a lot of kief. That’s where having a set of screens comes in handy. They come in varying sizes and with numbers of screens. You can find sets where the micron levels get smaller and smaller, meaning more varying levels of kief purity. This is ideal for those who want to use kief on a larger scale like for hash or edibles.

Ways to Use Kief

The most popular way of consuming kief is by smoking it. I love topping off bowls with it or sprinkling it in joints. It can really take the high to another level and it hits hard and fast.

One really popular method of smoking kief is rolling your joints in it. You’ll need some sort of sticky concentrate on the outside of the paper for the kief to bind to. I often use distillate or live sauce. I pour a small pile of kief and roll the joint in it until it’s covered in kief. You want to be sure to get all of the sticky parts covered in kief if you plan on taking the joint with you as the paper can get stuck to other things and that’s just plain annoying.

If you’d like to try an extra special joint then I recommend trying a Moonrock Joint. My favourite is Vanilla Ice Cream!

If you prefer smoking out of a bowl or want to roll your own joint you can buy it in bud form too. Just be sure to use your fingers or scissors as a grinder will get gunked up with all the gooey goodness.


You can also make your own moonrocks at home! All you need is a concentrate to coat the bud in (I recommend distillate or hash oil if you can find some), some kief, and a couple of your favourite buds. Drip your concentrate onto the bud and then roll it in the kief the same way you would with the joint.

Before people started making all these wacky newfangled concentrates like shatter and live resin, people smoked hash. The concentrate is one of the oldest forms cannabis throughout the history of the world. It is also one of the smoothest and tastiest concentrates in my opinion. As we’ve discussed before, there are many different types of hash and ways to make them. Using kief is one of the most tried and true methods out there. By pressing the kief with heat and pressure you can create your own hash. If you want you can press your hash and then turn it into live resin, but that does require a bit more work… Try making your own this weekend!

The purity of your kief will depend on how much plant material is also knocked off. Though the screen should stop most other material from passing through, there will still be pieces of plant matter that comes with it. Especially if you are using a drier bud. You can tell the purity partly by look, as pure kief should appear almost whitish-yellow, depending on the state of your trichomes. You can truly tell, however, by smoking the kief or hash as it should bubble and melt when heated. If it’s not as pure it will burn rather than melt. It is such a beautiful sight to behold when a pile of kief melts over your bowl.

You can also use kief to make your favourite edibles! You can cook with it the same way you would with cannabis flower but a little goes a long way with kief. Remember, to fully get the most of the THC; it must be decarboxylated. As mentioned, kief has a lot of terpenes in it, and can therefore make a very delicious garnish on cannabis dishes. It may not get you as high but you’ll be surprised how fresh it tastes!

Some strains that I’ve known to produce a lot of kief when ground up are: 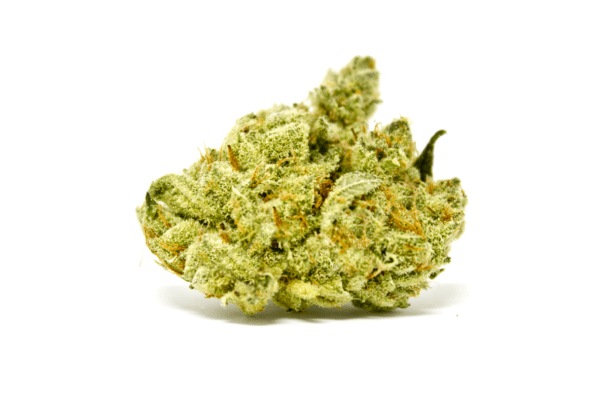 As much as I love trying all forms of concentrates, nothing beats kief for me. It’s such a simple yet incredible concentrate and you can’t beat the taste. Check out what your kief catcher has been up to and you might be surprised! Try adding the coin to the second chamber and enjoy the results!