Skip to content
Categories
Tag Cloud
benefits of cannabis oil benefits of marijuana oil benefits of THC oil benefits of weed oil budder wax budder weed cannabis beverages cannabis budder. budder cannabis coffee cannabis drinks cannabis oil curing buds curing cannabis curing marijuana curing weed dabbing cannabis dabbing cannabis concentrates dabbing concentrates dabbing weed dabbing without a rig drying buds drying cannabis drying marijuana drying weed how to dry weed marijuana coffee marijuana oil moon rock buds moon rocks moonrocks moon rock weed. moonrock weed THC budder thc coffee THC oil thc tinctures uses of cannabis oil uses of THC oil weed budder weed coffee weed edibles weed oil weed tinctures what is the best temperature to vape weed what temperature does thc vaporize what temperature to vape weed
Last week we discussed cannabis influencers, and the impact they can have on the market. We also addressed the desire of many cannabis users to move away from the imagery that had been associated with cannabis promotion and personalities for so long. On social media, there is an ongoing debate between influencers who choose to promote cannabis products by their words vs those who use sexuality and/or a ‘gangster’ aesthetic for their promotion. Nobody quite personifies the latter end of the spectrum than Dan Bilzerian.

Who is Dan Bilzerian?

Dan Bilzerian is a man of many roles. Born in 1980 in Tampa, Florida, Bilzerian originally wanted to become a Navy Seal. He even entered their training program in the year 2000 but was honorably discharged after a four-year service. After his stint in the Navy, he entered college to major in Business as well as Criminology.
He began playing poker in 2009. It was a move that quickly catapulted him into the limelight when he began earning millions at high-stakes games. Bilzerian never claimed to be good at poker but rather an expert at picking out high paying games. Since that time he has emerged as an Instagram star. When looking through his feed; you are bombarded with a lifestyle that is beyond unattainable, yet for many, that is the point. Bilzerian presents a life that many people can only dream about. His brand is certainly not for everyone and for many represents the more problematic sides of cannabis culture. Picture after picture of half-naked women draped over Bilzerian, huge stacks of cash, enough guns to supply a small army and, of course, weed.

As much as he and some of his followers might have you believe, there is a lot of uncertainty as to whether his lavish lifestyle is not actually funded by his poker playing, but rather, at least in part, money from hidden offshore assets from his father, who lives in seclusion in St. Kitts in the Western Indies after being convicted of fraud years ago.
A multi-millionaire professional poker player, a playboy, an entrepreneur, a social media celebrity, and an unapologetic, self-proclaimed asshole, with a history of making and posting derogatory and misogynistic statements and photos; Dan Bilzerian is a man people that a lot of people cannot stand, yet despite this, has established himself as a force in the world of influencers.

Known as the King of Instagram with over 28 million followers, Bilzerian wanted another title added to his belt – “The King of Weed.” He has been creating waves in the cannabis industry ever since he entered the scene. While some say he’s a breath of fresh air that the industry needed, there are also those who say he’s not the right person to represent the changing cannabis culture.
In 2017, he founded Ignite, a cannabis company that aims to dominate the market by providing ‘world-class, premium-grade cannabis products’. Through his company and “superior products,” he says he wants to change how society views cannabis and wants to be the catalyst for these changes. How exactly he is doing so, is unclear too many. Perhaps it is that we’ve been looking for the wrong changes?
Is this his idea of how people should view cannabis culture?

Here he is announcing that his cannabis company won the High Times Magazine award for best CBD pen: 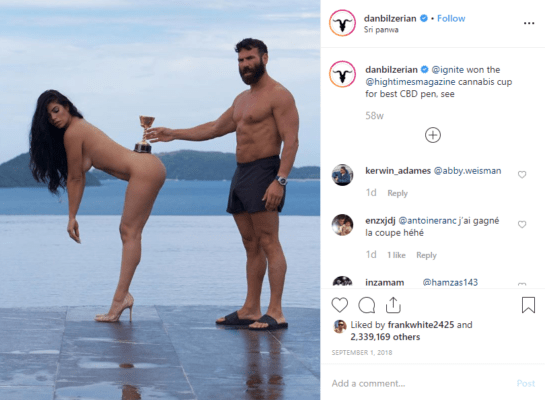 Bilzerian launched Ignite in September 2018 the Dan Bilzerian way – lavish, extravagant, and full of celebrities and beautiful women. A heavily promoted event, his millions of followers in social media also contributed significantly to the promotion of his new cannabis company.
Bilzerian’s popularity and the backing and support of his combined 43 million social media fans quickly made his products popular. His company had an edge that his competitors don’t have, and it has earned him a nice, comfortable place in the increasingly saturated, highly competitive and heavily regulated industry. However, pioneers of the industry are questioning his qualifications with users wondering if the product lives up to the hype. For many, it would seem the answer is no.

Changing how society views cannabis is still an ongoing battle. Although our society now is more accepting of cannabis both as a recreational and medicinal plant, many people are still against its legalization. To counteract this, pro-cannabis advocates raise awareness and educate people about the benefits of cannabis. Therefore, it was seen as a step backward by many people in the cannabis industry when Dan Bilzerian’s Ignite ads popped up all over California early this year. Instead of educating people and moving away from the stigma of stereotypical stoner culture, his ads were promoting misogynistic and sexist culture while alienating a large portion of the female market.
Women in skimpy lingerie and bikinis, sexual puns and innuendos, blatantly sexualized billboard ads – for many, this is not what the new cannabis culture is all about. His ads are not a reflection of where the culture is going and is an insult to the many women who have worked hard to be recognized as equals in yet another industry dominated by men. Instead, they’re a reflection of old-school misogyny and tell nothing of the benefits of cannabis. The ads, some argue, are a symbol of exactly what the industry is trying to move past and overcome.
It’s already an uphill battle changing many people’s views on cannabis, not to mention how some people still view women, and his ads only work to counteract this effort.

Some found the ads offensive. Some found it to be nothing but a common marketing strategy. They argue that the complaints are probably just a smear campaign by people who are threatened by his presence in the industry.
It’s no secret that sex sells. But at what cost? Is it worth sacrificing integrity and promoting a harmful image in order to appeal to people that shouldn’t have their views on cannabis and women validated and encouraged in the first place?
The ads, some argue, are also ignoring and excluding a huge target demographic – women. Women make up almost 44% of cannabis consumers, according to a 2017 study done by BDS Analytics. Ignite’s ads, women cannabis entrepreneurs say, are ostracizing this potential market. The ads appeal more to male consumers and largely ignore female cannabis consumers, the average age of which is 42.
Dan Bilzerian, in an interview, also said that his ads are no different than the ads by big brands such as Calvin Klein, Tom Ford’s, and Guess – attractive women modeling clothing and products. He brushed the issue off as something trivial, that people will always look for something to complain about. Still, Bilzerian cannot help himself from sharing images that only work to propagate this image of him. 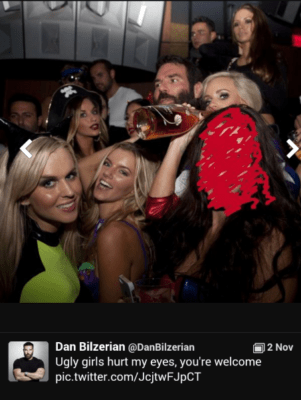 It is not only Bilzerian’s views on women that have caused controversy for the 38-year-old double heart attack survivor. In addition to posting countless photos of handguns and assault rifles during a time when gun crime is an incredibly sensitive issue in the US, Bilzerian has posted photos with controversial figures like convicted domestic abuser and boxer Floyd Mayweather Jr.
Bilzerian also posted a photo of himself with Donald Trump with the caption “In an age of pussified political correctness, you have to respect someone who’s so unfiltered.”

Bilzerian’s association with controversial figures, as well as his brazen glorification of gun culture is incredibly effective in gaining attention. Whether positive or negative, it all means more eyes on Bilzerian and in the world of influencers; eyes equal money.

Did the ads hurt his company?

Well, he has already launched his company nationwide and in Canada as well. His products are becoming popular in both countries, too, despite some less than stellar reviews. Now, he’s on his way to conquering the European market, having had launched his company in the United Kingdom last July with a line of CBD products, as THC remains illegal across the UK.
.
When he opened his stocks to the public, it drew an overwhelming response as investors clamored to buy stocks. Some of those who wanted a piece of his rising Ignite company were inexperienced investors made up of his massive social media following. His followers are, in a way, again contributing to the rapid rise of Ignite’s stocks. Last September, Dan Bilzerian’s Ignite company has seen a massive increase in trading volume by about 31%.

Whether or not Dan Bilzerian is good or bad for the cannabis industry is up to you. The question may not be as black and white as many people see it. It comes down to more than just his character. His ability to bring eyes to the cannabis industry is undeniable, and having an Ignite product clutched in his monstrous hands as he wraps his obscenely large muscled up arms around a half-naked model will surely help raise his companies profile. That said, many people can’t help but see him as an opportunistic misogynist who saw a chance to make money in cannabis and jumped in headfirst, without taking into consideration what kind of message he was sending. Honestly, it’s unclear if he even cared.
His actions have done more to gain him enemies than fans. Like getting booted from a nightclub after kicking a woman in the face, or when he was sued by an 18-year-old model after throwing her off his roof for a photo opportunity. It’s not like he does not have a chance to clear the air either. His could-care-less attitude is part of his brand, but there’s nothing stopping him from trying to grab hold of the image of himself he presents to the world. He literally has a platform designed for him to speak to the world and impart his values. He chooses to post photos like this: 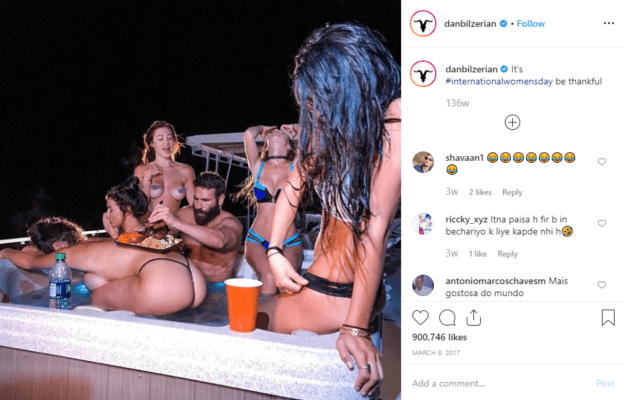 It’s not that Bilzerian is ignorant of how he is perceived and the offense that he causes. It’s the opposite. He is fully aware. He just simply doesn’t care.

The views expressed in this blog do not necessarily represent those of Just Cannabis and its employees.