Can Weed Enhance Your Next Game Night?

Cannabis has played in integral role in many cultures throughout history. In modern times we use it in several industries and as a source of food and medicine.  The other, more well known reason we use cannabis, is for its intoxicating properties. As a creative and innovative species, we have found various ways to incorporate pot into our lives.

Increasingly, Cannabis game nights are one of the highlights of many gatherings and parties. Weed and games not only help make parties more interesting, but they can also help people bond more with each other.

History of Cannabis and Games

The 60s’ hippie counterculture movement played a huge part in the emergence of cannabis as the middle class’ drug of choice. This cultural shift in thinking was sparked by anti-establishment sentiments, with people, especially college students, protesting for civil rights issues, against the unjust Vietnam war, and the use of nuclear bombs.

Amongst all the chaos of the 60’s cannabis was ever present. In fact, pot became a major player in hippie counterculture. Some people would still say that the 1960s were weed’s golden days.

People’s openness and experimentation with drugs, specifically psychedelics, helped shaped the era’s philosophies and political views as well as its music, arts, lifestyle, and even fashion.

The explosion of cannabis use was rampant, and social consumption of weed was everywhere. The pungent smell of grass and hash were constants at non-violent protests, and became a mainstay in many parties – be it small groups of friends or large gatherings.

Another feature of many of  these parties were games – board games, parlour games, you name it.

Cannabis, you could say, drew people together. It helped people feel more comfortable around other guests and because weed possesses properties that energize, relax, uplift, and boost creativity, it also made the party games all the more interesting.

Today, as society’s views on cannabis grow more accepting, weed games are becoming even more popular in social gatherings. You can even find online marijuana games. Some of these cannabis-themed online games educate people about cannabis, while others take the more typical first person shooter route with a stoner spin.

Who doesn’t enjoy playing games? I mean I know one guy but he is pretty weird. Many social gatherings these days are based around some sort of friendly competition. So why not try adding cannabis into the picture? You might find the experience becomes even more enjoyable.

Cannabis can enhance whatever it is you’re experiencing. So if you’re in a good place mentally, laughing and having fun, cannabis may help enhance the experience. Colours and lights can appear more vibrant. Your sense of smell and touch become more sensitive. The songs become more personal and engaging as conversations become captivating.

These cannabis properties can help you build a deeper and more emotional connection with other players in the game. You don’t feel as much pressure to win the round, meaning you feel more relaxed and attuned, not only to the game, but to the conversations around the table. 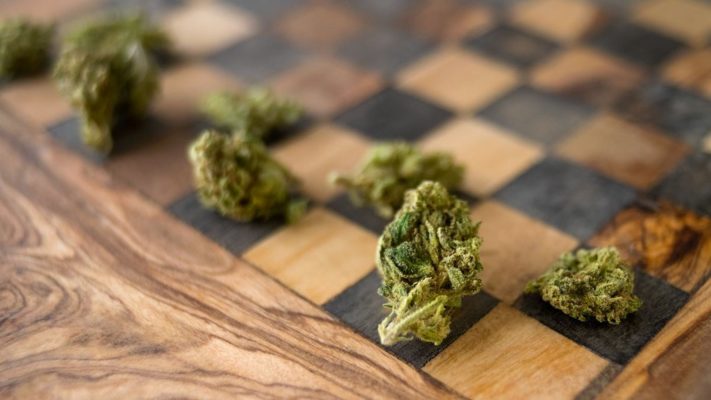 Cannabis is known to induce a bad case of the giggles. Everything, even simple games, can become the source of endless fits of laughter. You know the feeling. Even a simple look can cause you to erupt in laughter. This is because the cannabinoids stimulate the brain’s regions responsible for laughter. The fact that cannabis makes you feel lighter, relaxed, and blissfully happy all work together to enhance the experience.

Some people are introverts. They have a hard time striking up conversations with other people. Because of this, they feel more left out at parties.

Now it’s not for everyone, but for many people, mixing cannabis and games has a way of loosening people up. Cannabis makes you feel more sociable as well as talkative. Because you feel more relaxed, striking up a conversation with another player becomes easier.

Games can also have a way of bringing out the more competitive side of some people, unfortunately leading to arguments and unnecessary conflict. Everybody has their own story of their relative, friend, or maybe themselves storming out of a game because it was not going their way. Cannabis helps eliminate ego and allows its users to reach the perspective that it’s just a game and it’s about having fun. A couple of edible gummies may just be the key to controlling Uncle Ernie’s freakouts whenever the family plays Trivial Pursuit.

If you’re interested in introducing cannabis as your next game night, then here are a few out our favourite cannabis strains that can help you get started:

Sativa – Durban Poison
Durban Poison is a strong social lubricant, helping smokers to feel chatty and more at ease. This strain can confer a sense of mindfulness to help those perpetually distracted by depression, anxiety, and PTSD. It can also help those with attention deficit disorders maintain a deep, intense focus.

Sativa – Charlottes Web
Packed with CBD, an very low on THC, the uplifting nature of this “sativa” may be able to assist those suffering from things like depression, anxiety, and stress disorders.  If you or your guests are have low THC tolerance or suffer from things like anxiety, this may be the perfect flower for you!

Hybrid – Pineapple Express
Pineapple Express gives a long-lasting energetic buzz perfect for social gatherings. This calming, yet somehow stimulating, bud has the ability to lift the mood and heighten productivity making it perfect for anyone suffering from depression, chronic stress, anxiety, fatigue, or generalized restlessness.

These strains are known to give your energy a boost as well as invigorate you. They also help you relax, improve mood, and make you more sociable.

A Few Games to Try!

Now that you know some of the best cannabis strains for parties, let’s take a look at the best games to go with them. Of note, any party game can work, all you need is the special ingredient!

This is a relatively simple cannabis game to play at social gatherings. The first step is to get high, of course. Take your time. We’ll wait. Now… try and keep a straight face. Whoever cracks a smile or bursts out laughing has to choose between truth and dare. You may roll your eyes at this but it is actually quite difficult and can be a lot of fun!

The rules are basically the same as the regular Never Have I Ever game but this time you get to smoke weed so, obviously, better than the normal version. In this game, those who did the deed have to take a deep puff. This game is best played when you’re already a little bit high. As are most things in life.

There are cannabis focused games, too, that you can buy. Smokin’ Dice, for example, is a dice game with instructions on the dice faces. Players have to roll the dice and follow the instructions written on the face of the dice.

What To Know Before You Play Games with The Devils Lettuce

Not all games are safe to play when you’re high. Cannabis slows down reflexes and affects spatial awareness, so games that could result in someone getting hurt should not be played when you’re using cannabis. This is an accident or an injury waiting to happen.

Be aware that cannabis is known to lower blood pressure, and the sudden drop can cause you to lose consciousness if you suffer from pre-existing conditions.

Last (and an unpopular opinion!), I suggest you don’t mix weed and alcohol. You know yourself best and what you can handle but the mixing of the two often results in the spins and you’re not winning first prize if you can’t stand up.

Cannabis game nights are fun. It can help bring people closer together and makes the games more enjoyable and pleasurable. In fact, you could probably make any boring party game interesting by simply playing them while high. Just do a bit of research to make sure the games are right for everyone!