The recent scare surrounding e-cigarettes and vaping has made some people wary. And we can’t blame them. There is a great deal of information coming out, much of conflicting. It’s hard to know what is a valid concern vs scare tactics.

There have been rumours and mumblings throughout the cannabis industry in California that may see a potential ban on all vaping, be it THC, CBD or nicotine. While this solution may end up causing more problems in the end; forcing people to go back to traditional smoking, the fear is understandable.

There have been illnesses, and there have been deaths. But before you get carried away by the vaping hysteria, let’s take a closer look at cannabis vaping.

In recent months, there has been an increasing number of news stories centered on illnesses linked to vaping. The first symptoms were mild respiratory problems such as coughing with some nausea and vomiting. The symptoms progressed now with fever, fatigue, breathing difficulties, and chest pain. Many of the patients, needed to be taken to the hospital for acute respiratory distress syndrome. Upon examination, doctors found fluid accumulation in their lungs. This fluid buildup necessitated the use of machines to pump oxygenated blood to the body.

It was on August 23 that the first death related to vaping was recorded. A few weeks later, a second death was reported. The victim was using cannabis oil. Not long after, five more deaths related to vaping surfaced.

However, before these deaths were reported in the first place, officials were already investigating and looking into the possible causes of fast-developing respiratory problems and pneumonia that was spreading across 36 states. As of this month, there have already been more than 380 cases of acute respiratory stress syndrome and the death toll from vaping related illness is 17 in the US alone.

As of now, there have been no reported deaths in Canada, however, illnesses have begun to appear. It is unclear at this time if these illnesses are related to THC cartridges.

It is important to note that the majority of these deaths are linked to black-market cartridges. A recent test conducted by CannaSafe, a cannabis testing company in the US, for an article by NBC, looked at 18 vapes from both from dispensaries, as well as black market street dealers. Of the ones purchased from dispensaries, none tested positive for heavy metals, pesticides or residual solvents like Vitamin E.  However, of the 15 illicit cartridges purchased from street dealers, 13 contained vitamin e and even more concerning 10 contained myclobutanil, a fungicide that can transform into hydrogen cyanide when burned.

Although the exact cause of the deaths and illnesses remains unclear, there has been a great deal of evidence linked to vaping illicit THC cartridges containing added terpenes and fillers, particularly vitamin E acetate. According to the investigation, vitamin E acetate was present in the cannabis vape oil samples presented by the victims.

Vitamin E is produced from vegetables as well as corn oil. It can also be produced synthetically from petroleum. As a dietary supplement, vitamin E oil is safe for consumption. It’s also safe for topicals since cosmetic manufacturers use it in their products.

The use of vitamin E acetate is recently new to the cannabis industry. Some manufacturers of cannabis vape oils use this as a sort of thickener, increasing the liquid’s viscosity without affecting its potency. Manufacturers claim that thicker vape oil has better quality and lasts longer.

That said, experts explain that vitamin E acetate is not made for inhalation. There’s just too little data on the toxicity of the inhaled forms of vitamin E oil, particularly vitamin E acetate. What studies have been conducted have shown that oil can be pretty harmful to the lungs. It damages the fluid lining of the lungs, preventing the lungs from taking in oxygen. Because the lungs can’t absorb oxygen, pulmonary distress happens. Moreover, the buildup of the oil also allows the lung fluid to clump up together and accumulate.

This recent outbreak of vaping-related illnesses and deaths has caused New York’s Health Department to subpoena three manufacturers of vitamin E acetate thickening agents as they investigate the case.

LA has recently banned all vaping all flavored tobacco with the rest of the state looking to follow. Other states are watching closely, in addition to Canada which is rumoured to be rolling out legal cartridges alongside edibles this month. Now, the future of vaping, specifically THC is in the air.

Distillate or CO2 – How Do They Differ?

With the recent controversies surrounding cannabis vaping, you have to be more discerning in choosing your vape oil, especially when it comes to their extraction methods. There are many legitimate companies out there such as Sovrin and Onli Flower that produce high-quality products that are not cut dangers additives.

There are two common methods of extracting THC or CBD for vape oil: CO2 oil and distillate.

This solvent-free extraction method makes use of supercritical carbon dioxide to extract the cannabinoids and terpenes. CO2, under specific pressure, turns into liquid. In its liquid form, it “washes away” the cannabinoids and terpenes from the plant material. What’s left is a viscous oil. To make the oil purer, it undergoes another process where the CO2 is evaporated, leaving behind pure cannabis oil.

Distillate, on the other hand, is simply extracting the cannabinoids through CO2, ethanol, or butane extraction methods. However, there’s an extra step needed to make the oil purer. The cannabis oil gathered through extraction is heated to its boiling point. The vapor is produced by heating the oil and then collected into another container, leaving behind the undesirable chemicals. This method produces 99%, pure, solvent-free cannabis oil. Terpenes are then added to the oil for flavour and additional potency.

Things to Know Before You Try Vaping

In choosing vape oils, go for trusted brands that have a reputation for being safe. You can even look at the laboratory reports on many of the company’s websites. This way, you’ll know the ingredients as well as cannabinoid and terpene profile of their products.

In light of the recent illnesses and deaths associated with vaping, it would be wise to avoid vape oils that use cutting agents, especially vitamin E acetate. So read product labels and laboratory reports. Send the manufacturer a message asking for the product’s ingredients. There are many premium-grade vape oils in the market right now are, and below are some of them:

This company prides itself on its cannabis distillate vape oil. Their oils are pure, potent, and very safe. They also offer their own brand of pen as well, perfect for their cartridges or any other .510 thread. They offer more information on their website where you can find lab reports and other info.

Onli Flower:
This CO2 cartridge comes in three incredible flavours. With nothing but pure oil containing its original terpenes, you cannot beat the taste of this cartridge if you’re after authentic strain flavours. The cartridge has a really cool feature that allows you to change the airflow, allowing you to get the exact amount of vapour you are after! 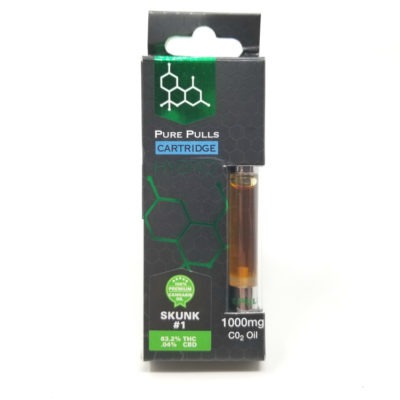 Diamond Concentrates:
No solvents are used in production to derive the THC distillate – making the whole process as natural as possible. Rarely will you ever find such a beautiful disposable pen. There are a lot of disposable pens on the market but Diamond Concentrates have truly set themselves apart with their incredible line of pens and flavours.

If you have chronic health issues, especially lung problems, then know that there are safer methods of consuming cannabis than vaping. Eating cannabis is still the healthiest way to consume it.

There will always be companies that will take advantage of consumers and, in turn, make things considerably more difficult for the whole industry. People will continue to produce low-quality vape oil mixed with potentially dangerous additives and thickeners and pass them off as premium-grade. These fake and contaminated vape oils harm consumers. The recent issues surrounding vaping prove that.

At the same time, the outright ban on all vaping has the potential to lead many back to cigarette smoking. There are many who are concerned that the priorities of the governing bodies are not in line with the rest of society. As Michael Siegel explains in his article in the Los Angeles Times, issues like gun violence, alcohol, and tobacco use are arguably more pressing when it comes to the safety of today’s youth.

If anything this makes the need for cannabis legalization nationwide across the US more clear. As long as people are forced to buy their cartridges from street dealers rather than dispensaries, this risk remains just as prevalent.

It is unclear what the future holds for vaping in the US. Keep a close eye on it and stay informed. As a consumer, you have to be careful in choosing your vape oil and buy only from trusted providers.

One thought on “A Closer Look at Vaping”