In the marijuana world, strains come and go; nevertheless, the strains that cultivate an infinite legacy continue giving back to the society for generations — OG Kush is one such strain. OG Kush marijuana strain is arguably the main backbone of West Coast’s weed culture. It’s perhaps the first strain to achieve both legendary status within the Indica culture and widespread recognition in the mainstream. Thus prompting cannabis growers to use it for breeding other strains and further grow the culture and industry.

As with most weed strains, the exact origin and history of OG Kush Indica strain are heavily disputed. The most popular myth surrounding this strain holds that OG Kush is a collaboration between Matt Bubba Berger and Josh Doe. Rumor has it that in the 1990s, Matt Bubba sourced the strain from Amsterdam and brought it to Florida. He nurtured it for some time and after obtaining its seeds brought them out to California.  He gave the seeds to breeder Josh Doe to exploit the strain’s potential. Josh Doe didn’t disappoint.

When it comes to its name, there are several theories as to what the “OG” stands for. In contrast, some say that it could be a short form for Overgrown.com, the once leading international weed grow-site, which was infamously closed by the Canadian police force in 2006. Others claim it alludes to the Californian strain Original Gangster. Also, it could stand for “Ocean Grown”, or it could merely be a short form for “Original”. All in all, it doesn’t matter. Since its birth in the early 1990s, OG Kush Indica strain has gained global recognition in addition to being instrumental in creating some great strains today.

The buds of OG Kush strain are large and dense, with vibrant crystalline orange trichomes. They grow in lime green clusters coated with a lot of resin. You may have come across this brilliant strain in its resin-laden form multiple times but mistaken it for molds. The leaves are usually yellowish-green, but when grown in colder weather, the leaves adopt traces of purple as a result of anthocyanin pigments.

OG Kush strain comes with an unmistakable aroma that’s partly fresh and partly pungent. It features tangy citrus notes with hints of diesel, spice, pinewood, and earth undertones. Most users report that smoking this strain feels like they are in a pine forest.

The OG Kush cannabis strain features a bold and striking flavor.  Most people who’ve been in contact with this strain compare its aroma to that of an American barbecue. The flavor tastes like lemons with a touch of spicy earth notes complemented by a touch of pine and diesel.

With a pretty high THC level of up to 26%, OG Kush proves to be highly potent. The intense high kicks in fast, with a deep body buzz and animated euphoria. It’s perfect for any time, but effects may vary depending on a particular phenotype. You may experience a strong indica high complemented with strong calming effects, while someone else may experience a more potent sativa high complemented by a euphoric sensation. Strong, exceptional flavor and pricy, OG Kush strain guarantees an explosive high that’s bound to hit even pro smokers.

Largely indica, OG Kush weed strain’s high hits you hard. It produces a mental buzz that induces profound meditation effects causing couch lock, mostly if consumed in higher doses. It has potent calming and euphoric effects great for unwinding after a strenuous day. You will feel slightly “spaced out” when under its influence. It is also known to induce hunger for food, intensifying flavors and appetite.

Strangely, OG Kush has very mild side effects given its reputation. With the high levels of THC, you would think that those who smoke OG Kush have it very rough upon downturn. Well, that couldn’t be further from the truth. You’ll experience the usual dry-mouth and dry-eye issues that manifest as a result of dehydration. Take lots of fluids to reduce these effects. For the newbies, you might experience a certain level of lethargy and mild dizziness because of its incredibly high potency. If you overdo it, you might experience some slight headache, paranoia and mild anxiety. However, such cases are sporadic.

Given its consistent potency, and high THC levels of up to 26%, OG Kush indica strain is widely prescribed to help cure a wide range of health disorders. Its calming effects can help alleviate deep muscular tension, migraines, and persistent nausea. Its ability to induce a state of peaceful meditation can be beneficial for those suffering from depression and chronic stress. OG Kush strain is also a favorite among those suffering from insomnia and restlessness. Rumor has it that this strain is more prevalent among gang members due to its high level of CBD. They believe that it helps ease pain in gunshot wounds. Whether there’s some truth to this rumor, the fact remains that OG Kush is indeed an excellent analgesic for numerous physical and psychological health issues.

The list of awards won by OG Kush weed strain is too high to count keeping in mind that it’s also a parent to so many other brilliant strains out there. OG Kush is the most popular strain among marijuana smokers. It also currently holds the Strain Madness Championship title.  It also made it into the High Times’ list of 25 Greatest Strains of All Time. Nevertheless, the main reason OG Kush indica strain enjoys widespread recognition and popularity is because of its resilient, reliable high and delightfulness.

OG Kush is undoubtedly a blockbuster in the worlds of recreational and therapeutic weed consumption. If you’ve never tried it before, you’re missing on a world of good. And although pricy, accessing this strain is pretty easy if you come from a “weed-friendly” state. You can as well purchase it from an online vendor.

Be the first to review “OG Kush” Cancel reply 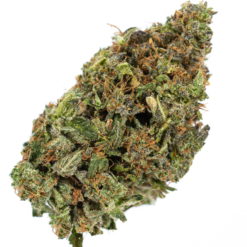