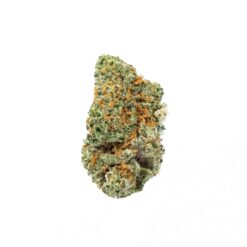 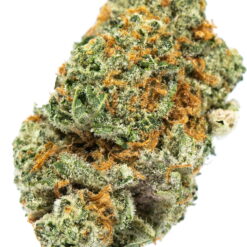 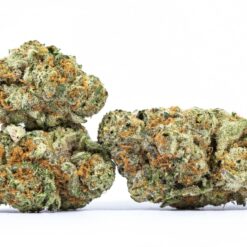 Whether just looking to have a good time or needing a great pick-me-up in the morning, nothing goes down like a chilled mimosa – a delicious blend of sparkling champagne and sweet orange juice resulting in a refreshing citrus cocktail. But we are not always into drinks, right? The mimosa marijuana strain is very much like the drink it is named after in that it delivers an almost instant energy boost that keeps you physically and mentally active while remaining surprisingly calm. Its sweet flavours draw you in before sending you buzzing away after a few puffs.

Mimosa weed strain is a Sativa dominant (70% sativa/30% indica) hybrid indica from Northern California. The strain by breeder Symbiotic Genetics is a cross between Clementine and Purple Punch. Clementine is a potent Sativa strain that sparkles with the purity of fresh orange crust flavour. It presents a tropical fruity flavour with a touch of herbal and pepper flavour to awaken the senses from the onset. On the other hand, Purple Punch is a dense indica. Infused with pepper and pine flavours, it goes without saying that this strain delivers a full-bodied high.

Since its debut in 2018, the mimosa cannabis strain has gained tremendous popularity and garnered a faithful following among marijuana enthusiasts. Given its consistent award-winning trend, this strain is here to stay. In 2018, mimosa came 2nd in the Best Sativa category at the High Times Midwest Cannabis Cup and managed to clinch 1st Place in the 2019 Recreational Sativa Connoisseur Cup. In 2019 still, this strain came first in the Hydrocarbon Vape – Rooster 710 Showdown (Mimosa Cartridge) before coming 3rd in 2020 for the Recreational Sativa – THC Championship.

With a high THC level of between 17%-30%, this strain is not for the faint-hearted. You should smoke it in moderation, even if you have much experience in marijuana – that is if you want to get anything done at the end of the day. Rich in two highly credited terpenes, beta-caryophyllene, and d-limonene, mimosa is fast becoming the star it is in the indica world. It also contains mild quantities of several flavonoids, and cannabinoids each presenting distinct characteristics to complement the mimosa strain.

D-Limonene comes off as a sharp citrus taste within the more earthy notes in the mimosa strain. Linalool terpene is responsible for the powerful calming effect of the mimosa strain. Mimosa cannabis strain high hits hard and almost instantly, and is therefore recommended for daytime use. Being Sativa dominant, its high can last for several hours, and upon reaching the downturn, it can stir up a big appetite. From the onset, the strain is immensely stimulating with a pleasant body buzz that morphs into laser-like mental focus and surprisingly deep calmness.

The mimosa weed strain plant is a beauty to behold. The buds are generally small with dense spherical, olive green nugs, with lots of orange hairs and snow-white trichomes. In some instances, the buds display traces of purple, a mark of its Purple Punch descent. If you run your fingers over the buds and sticky orange hairs, a film of waxy residue is left behind, demonstrating the brilliant cannabinoid content in the strain.

Apart from its name, this Sativa-dominant strain also inherited its namesake’s aroma. It produces refreshing and revitalizing fragrances that remind you of tropical citrus fruits with woody and earthy pungent tinges. The Mimosa marijuana strain gets its earthy, tangy scent from beta-caryophyllene, while the sharp fruity aroma comes from myrcene and limonene terpenes.

The general flavour of the mimosa strain is tropically sweet, fresh with shades of citrus. If you delight in the flavour of the boozy brunch beverage, then you’ll love the flavours that come off the Mimosa indica strain. The tangerine taste from its parent Clementine is quite pronounced as it kicks in with a sweeter and juicier punch than other orange-flavoured cannabis strains. It tastes more like freshly-squeezed orange juice with the orange spurt just right. However, the mimosa’s flavour is blended with delicate earthy undernotes that join into a sweetly tangy experience.

Mimosa weed strain high is felt immediately after smoking. The high starts with an energetic thrill followed by a mix of ecstatic happiness and sharp focus that allows you to remain active and alert for hours. Once the effects start to kick in, you will experience mild physical relaxation, with tickles running along your body, from your head to your toes. Indulging in this strain allows you to enjoy whatever you are working on, whether reading a book, partying or working. However, overindulgence will likely end in a couch lock due to its high potency.

This Sativa-dominant hybrid indica has been reported to cause paranoia and anxiety if used in high doses due to its high THC levels. Just like other marijuana strains, mimosa can cause dehydration which manifests in a dry mouth and eyes.

Medically, mimosa indica strain offers a horde of benefits to aid in the treatment of various illnesses. In addition to having antibacterial properties, beta-caryophyllene is akin to d-limonene, in that it also presents anti-inflammatory properties. These features have allowed it to be used widely for pain-relieving. D-Limonene therapeutic properties include anti-inflammatory, antioxidant, and is a relaxant suitable for stress and anxiety control. Linalool terpene is responsible for the powerful calming effect of the mimosa strain. It also has analgesic properties excellent for dealing with chronic aches and pain or chronic fatigue. Mimosa can also alleviate nausea and increase appetite if you have eating problems.

Mimosa marijuana strain is a jolly and invigorating strain. This sativa dominant hybrid indica is best used during the day since it can keep you awake for long hours if used at night – unless that’s your intention. Among its myriad benefits is helping to increase focus, calmness and boost energy. It can also help in remedying a host of health issues such as migraines, PTSD, chronic fatigue and aches, etc. However, ensure that you use mimosa indica strain in moderation to avert potential adverse effects.

Be the first to review “Mimosa +” Cancel reply 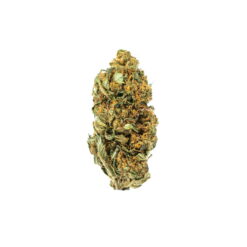 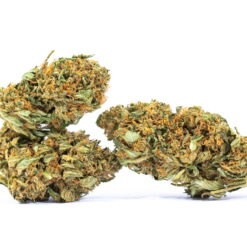